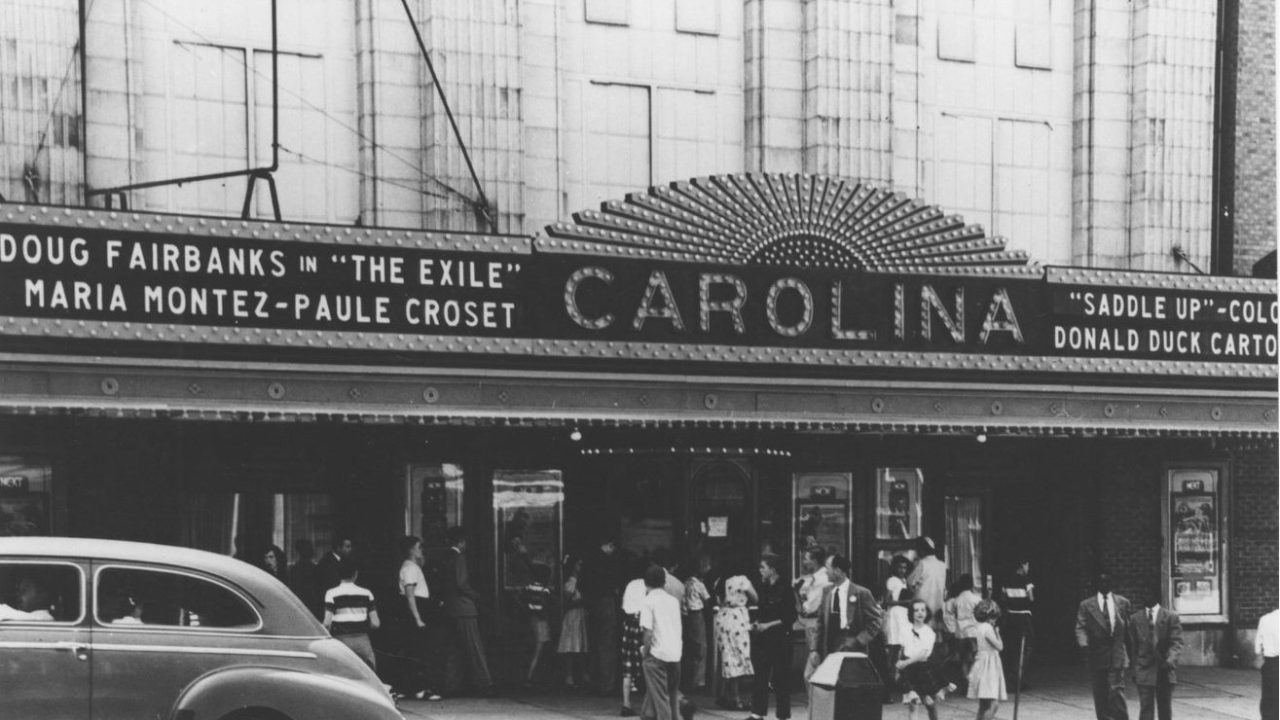 Non-profit Theater Reflects on its History in Durham

The Carolina Theatre of Durham opened on February 2, 1926 as the Durham Auditorium, hosting community events such as Miss Durham contests and high school commemorations. The theater also hosted a variety of national touring acts including Katharine Hepburn, Marian Anderson, and Tallulah Bankhead. The theater was the only Durham theater to admit African Americans, though there were separate entrances, ticket booths, seating, and lounges. African Americans were also forced to use the 97 un-airconditioned stairs to the second balcony to watch shows.

In 1929 the theater was remodeled to accommodate film screenings and in the same year, the Durham Auditorium became The Carolina. By the 1940s film had become extremely popular. A bus depot across from the theater brought soldiers from Camp Butner to The Carolina, where the theater sold war bonds and accepted tin cans as admission in an effort to support the war. Windows were painted black to accommodate blackout regulations and the bulbs of a flashing sun marquee were removed due to its resemblance to Japan.

In the 1960s, because the theater was a city-owned building, it became a focal point of the civil rights movement in Durham, as it had been using public funding to continue segregation. Attorney Floyd B. McKissick, along with the National Association for the Advancement of Colored People youth leaders John Edwards, Vivian McCoy, and Walter Riley challenged this system of inequity in 1961. In March of 1962, “Round Robin” protests began as Black patrons approached the White ticket window and were turned away only to return to the back of the line and continue requesting admission. In May of 1963 Wense Grabarek was elected mayor and worked to convince The Carolina management to embrace the idea of integration. In July the theater began operating without segregation, two months before Martin Luther King Jr.’s “I Have a Dream” speech and a year before the Civil Rights Act of 1964 forced other institutions in the South and nation to integrate.

Population shifts throughout the 1960s and 1970s caused many people to move away from city centers, causing attendance at The Carolina to decline by 80%. The Carolina fell into disrepair and the owner released the contract back to the City of Durham. Soon after, The Carolina was noted as a “significant building in the city” and the entire center portion of downtown was placed on the National Register of Historic Places. In March of 1978, Durham City Council agreed to lease the building to a non-profit group to use as an arts film theater, later becoming the Carolina Theatre of Durham.

In 1986 Durham County and the City of Durham appropriated $7.8 million from a bond issue to restore the Carolina Theatre. The volunteer-led restoration project took six years, and reopened in 1994. Volunteers were led by Connie Moses, who was inspired to save the Carolina Theatre from the fate of being torn down, like so many other historic buildings in Durham. The restoration added a lobby and two modern cinemas, removed the false ceiling revealing the balcony that had been segregated until the early 1960s and hidden from view for nearly two decades.

Today, the Carolina Theatre continues to present film, live events, educational programs, and is a home for many community organizations. The theater presents hundreds of film and live events, as well as hosts more than 15,000 students each year for its educational programs. The theater is also home to three exhibits showcasing the history of the Carolina Theatre, the volunteers who helped save the theater, and the role the theater played in the civil rights movement. All exhibits are open during film screenings and live events. Guests are required to show proof of a COVID-19 vaccination or a negative COVID-19 test taken within 72 hours of entering the theater. Masks are also required at all times unless actively eating or drinking.