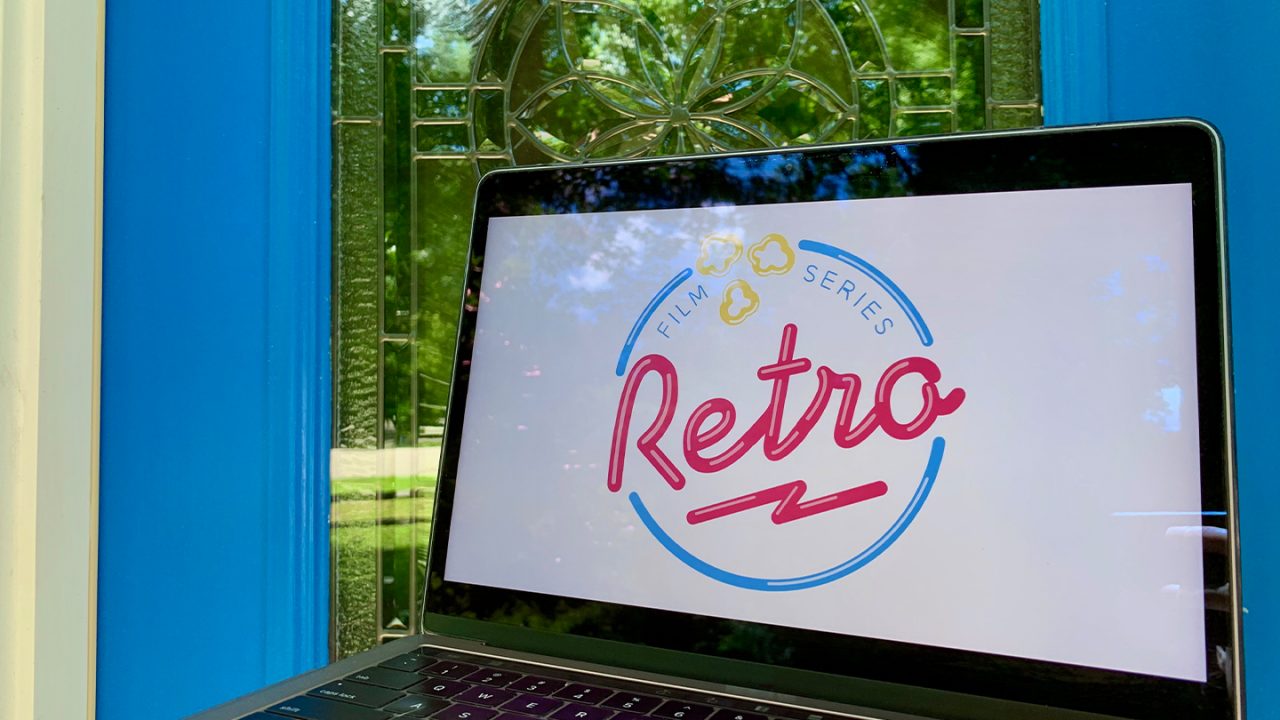 “The secret to a successful watch party,” Jim Carl, the Carolina Theatre’s Senior Director of Film Programming, told me via email, “is to take a good long nap for several hours before starting one. Usually with a cat on your lap.”

If you’ve seen the Retro Film Series Facebook lately, you know that Carl’s strategy is working. Usually, he spends his Friday nights running Retro’s iconic double-features, but since the Carolina Theatre closed its doors in March, he’s shifted his focus to memes shared by millions and globally-attended Facebook watch parties that simulate the Retro experience. I caught up with Jim Carl and two of his watch party co-hosts, Amy Arcos of Amy May Pop Art and Garrett Southerland, about how they’re bringing Retro to their living rooms while we stay Safer-At-Home.

Carl has weeks of successful watch parties behind him now, but he never planned to host virtual movie nights. “I think movies ought to be seen on the biggest screen possible, including a sound system that requires Hogwarts-like wizardry, and with an audience who is absolutely captive,” he explained.

Hyperbolic, maybe, but ask any of our regulars: Part of Retro’s magic is the audience experience. Southerland, a Retro fan for seven years, misses that most — “the shared experience sitting in a darkened room with people who love a particular film as much as I do.”

Arcos, a Retro supporter since 2016, feels the same. “I miss sitting with people like me: who love film, love Durham and love the Theatre with all our hearts,” she shared. “There is so much love at every Retro double-feature.”

While watch parties can’t simulate that Cinema One feeling, Arcos does think they create a similar atmosphere. “It feels like you’re watching a movie with friends. After a few drinks and snacks, it’s a great night in quarantine. Watching cheesy movies with film nerds. What could be better?”

The family can join in on the fun now, too. Sometimes, when it’s a kid-friendly film, Arcos lets her two young sons watch with her in the living room, and she and her husband no longer need to trade-off childcare to get to the theatre.

Plus, the watch parties offer a little stability for many long-time Retro fans. “In this tough time of seclusion and social distancing, it has been a Godsend to be able to continue with the Retro Film Series,” Southerland said. “It has made my Wednesday and Friday nights the highlight of every week.”

Now that Retro isn’t anchored to Cinema One, fans from around the world can join in. When Arcos co-hosted “Night of the Creeps,” film fans joined in from Chicago, San Francisco, South Florida and Australia. “Some found it through word of mouth and some are just browsing Facebook Live and hop on to watch with us,” Arcos explained. “It was on a Friday night, so we definitely had a party vibe going.”

As for Carl? He enjoys finally getting to sit in a comfy rocking recliner (pictured) during the films. “We bought all those nice recliners for our cinemas but I rarely ever get to sit in one and watch the show,” he said. “I’m usually standing in some corner.”

Home concessions, on the other hand, can’t match the Carolina lineup — and that’s not just my personal bias. “Boy, do I miss that popcorn!” Arcos admitted. “My snacks are whatever I bought for my kids that week that I can dig out of the pantry, but my favorite is Cheetos.” (If you’re a fellow Cheetos-lover, she recommends eating them with chopsticks to dodge cheesy fingers.)

Southerland was on the same page. “I am always a fan of a good standard of a Coke and popcorn, and nothing beats being able to still order true ‘theatre’ popcorn from the Carolina Theatre.” We didn’t even set him up to that promo, but if you’d like to pick up watch party concessions, you can order online every Friday from 4-8 p.m.

Here at the Carolina, we’ve always known that Retro fans are the best in the business. As Carl succinctly put it, “They’re awesome.” We can’t be more grateful for the outpouring of support for Retro, whether we’re together in Cinema One or in living rooms across the globe.

As for the future, Carl and the Carolina operations staff are busy planning what the next season of Retro will look like with new safety precautions. Let’s just say, he’s optimistic — “I’m looking forward to breaking some box office attendance records,” he said.

And don’t worry. The memes aren’t going anywhere, even when we’re all back at the movies.

Join in on watch parties every Wednesday and Friday at 8 p.m. ET on Retro’s Facebook page.

Lydia Huth is a marketing coordinator for the Carolina Theatre of Durham, but what really matters is that her first Retro double-feature was “Buffy the Vampire Slayer” and “Serenity.”