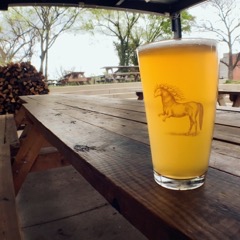 Durham-based Ponysaurus Brewing Co. will debut a delicious new beer exclusively at the Carolina Theatre this Thursday (April 13) during the venue’s planned Bruce Hornsby & The Noisemakers show. Carolina Theatre concessionaires will pour the new Ponysaurus Extra Pale Ale alongside some of the brewery’s other craft beers at a stand in the venue branded with the brewing company’s logo and using the  beer-maker’s distinctive tap handle, which features a Ponysaurus figurine.

Bruce Hornsby fans and Carolina Theatre patrons will be among the first tasters to try Ponysaurus Extra Pale Ale. The beer will be available at other outlets the day after the concert, including the brewery’s taproom at 219 Hood Street in Durham.

The tasty new brew contains notes of toast, grapefruit and pine and has an alcohol-by-volume of 5.8 percent. Early samplers of the beer indicate that it will fit in nicely with the brewery’s other popular offerings, such as Rye Pale Ale, Biere De Garde, Scottish Ale, Belgian Pale Ale and more.

“We love our Pale Ale so much, we thought, ‘Why not go bigger?’ The Extra Pale Ale is a little bigger, all the way around, with a smooth finish,” said Keil Jansen, brewmaster and partner at Ponysaurus Brewing Co.

The Carolina Theatre started offering beer from Ponysaurus Brewing Co. alongside other state-brewed craft beer earlier this year. The downtown Durham venue is committed to offering locally made products to its guests whenever possible.