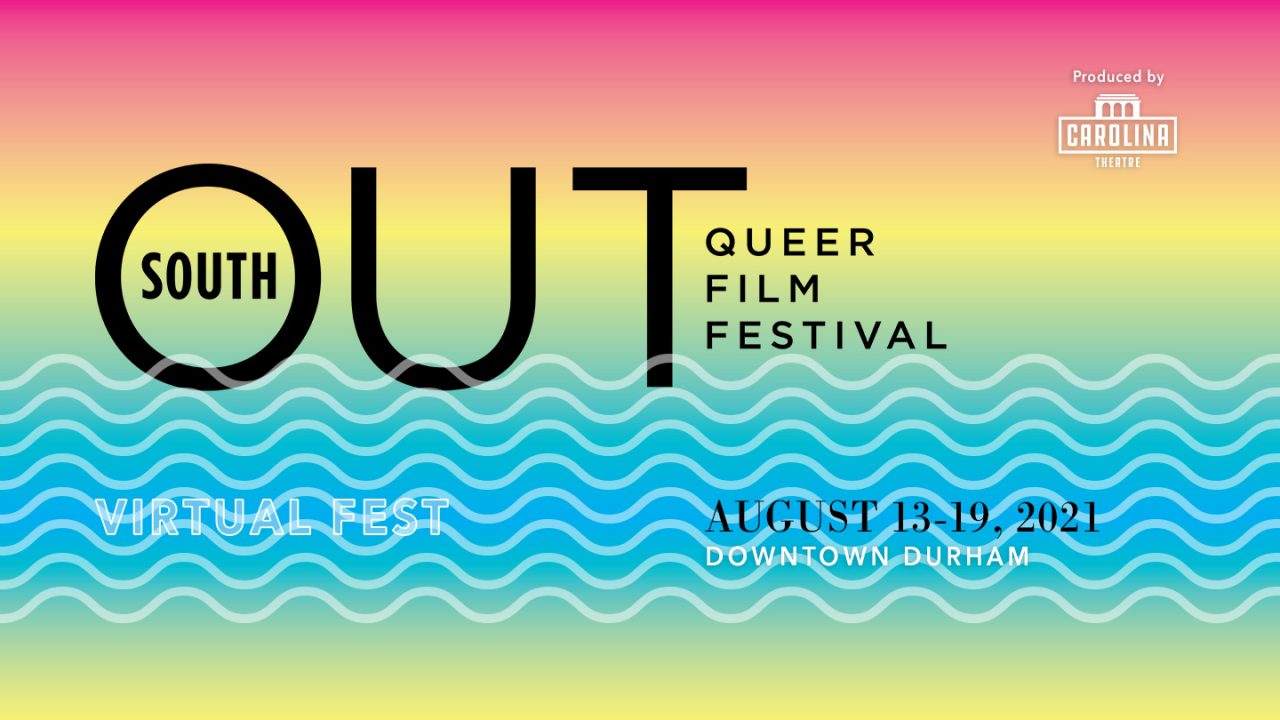 DURHAM, NC — July 7, 2021 — The OutSouth Queer Film Festival, one of the largest queer film festivals in the United States, will be all-virtual again in 2021, the Carolina Theatre of Durham announced today. Formerly known as the North Carolina Gay + Lesbian Film Festival (NCGLFF), OutSouth will make its return with a 102-film lineup of short and feature films available for online viewing only August 13 to 19.

Once films unlock on August 13, purchasers will have until 11:59 p.m. (EST) on August 19 to start watching. Once they begin a film, they have 10 days to finish watching. Films purchased in advance of the film festival will unlock for viewing on August 13. OutSouth will be a fully virtual festival in 2021. No tickets or passes will be sold through the Carolina Theatre Box Office.

“OutSouth and its producer Carolina Theatre of Durham are incredibly proud to announce that the 26th Annual OutSouth Queer Film Festival will again take place August 13-19, 2021, virtually for our local community and beyond. Thanks to our festival web portal Eventive, North Carolina and nine additional states, as well as the District of Columbia, will enjoy access to this year’s festival. Once more we have compiled for you a fabulous line-up of shorts, features, and documentaries – as well as informative live virtual panel discussions – from a wide array of gifted filmmakers in the Queer Community.” OutSouth Queer Film Festival Manager Chuck Wheeler said.

“These 102 films represent the best in LGBTQ+ entertainment and will be available online for your viewing pleasure 24-7 over one incredible week in August. So please plan to come together again in 2021 as a member of the OutSouth virtual family to celebrate Pride in August. Your individual support, the volunteers, the sponsors and donors, and the theatre have made the successful continuation of OutSouth possible in 2020 and 2021, in the face of the many challenges we have faced throughout the Pandemic. And we cannot express our gratitude enough for you all having remained with us! We hope to see you this August and for many years to come!”

Among the highlights of this year’s festival programming are:

JUMP, DARLING: Featuring the brilliant Cloris Leachman in her final starring role before her death in 2021, JUMP, DARLING pairs love of drag with an aging iconic diva to ask the questions about what inspires us to carry on. Half-prepped before a dressing room mirror in the back of a bustling city gay bar, Russell, an actor turned drag queen, struggling to find his voice, is given a wrenching ultimatum. Overcome by indecision, he escapes to his grandmother’s house in the country. There he finds sardonic Margaret in steep decline. In a perfect, if precarious, solution for both of them, he moves in to protect her from her greatest fear—the local nursing home. In no time, Russell is lighting up the local college bar with his alter ego Fishy Falters. Antagonized by his overprotective mother, a sexy-though-mysterious college boy, a cockney city gay bar owner, and the specter of his failed-artist grandfather, Russell struggles to realize a bold new identity. Meanwhile, Margaret fights to retake control despite her faltering mind.

CURED: This feature-length documentary takes viewers inside the David-versus-Goliath struggle that led the American Psychiatric Association (APA) to remove homosexuality from its manual of mental illnesses in 1973. Viewers meet the key players who achieved this victory, along with allies and opponents within the APA. The film illuminates the strategy and tactics that led to this pivotal yet largely unknown moment. Indeed, following the Stonewall uprising of 1969, the campaign that culminated in the APA’s decision marks the first major step on the path to first-class citizenship for LGBTQ Americans.

NO STRAIGHT LINES: THE RISE OF QUEER COMICS: A lively look at five LGBTQ+ comic book artists whose careers go from the underground scene to the cover of Time Magazine and the international stage. In this adaption of Justin Hall’s anthology of the same name, No Straight Lines invites Alison Bechdel (Fun Home), Jennifer Camper (Rude Girls and Dangerous Women), Howard Cruse (Gay Comix), Rupert Kinnard (B.B. And The Diva) and Mary Wings (Come Out Comix) to share their stories and observations on everything from the AIDS crisis and workplace discrimination, to the search for love and a good haircut.

A full slate of OutSouth film program synopses are available at carolinatheatre.org.

For more than 26 years, the Carolina Theatre of Durham has welcomed thousands of fans seeking the best in LGBTQIA+ cinema into its historic venue. Through the power of virtual cinema, thousands more can experience the OutSouth Queer Film Festival August 13 to 19. We hope you’ll join us for this annual celebration.