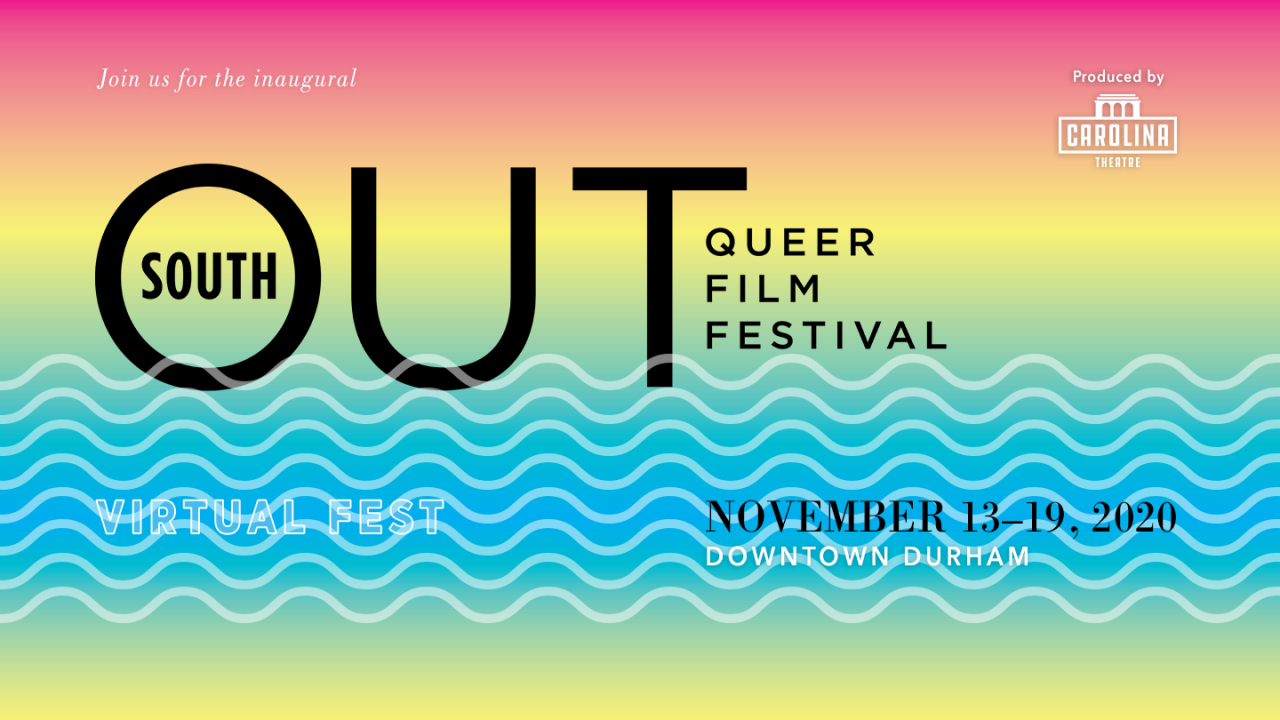 DURHAM, NC — October 13, 2020 — The inaugural OutSouth Queer Film Festival, one of the largest queer film festivals in the United States, will be held online only in 2020, the Carolina Theatre of Durham announced today. Formerly known as the North Carolina Gay + Lesbian Film Festival (NCGLFF), OutSouth will make its debut with a 41-film lineup of short and feature films available for online viewing only November 13 to 19.

Purchasers will have 72 hours to watch films after buying them. Films purchased in advance of the film festival will unlock for viewing on November 13. OutSouth will be a fully virtual festival in 2020. No tickets or passes will be sold through the Carolina Theatre Box Office.

Long regarded as a signature Durham event, OutSouth was postponed twice due to the pandemic by its producer, Carolina Theatre of Durham, Inc. The nonprofit that manages the host venue of the festival made the decision to move the event to a virtual cinema format and extend the viewing window to November 19 after surveying past guests, volunteers and LGBTQIA community members in late September.

“Though we had originally hoped to produce an onsite festival in 2020, after listening closely to our audience – both officially and unofficially – who overwhelmingly encouraged us to host a completely virtual event this year, we made the decision to follow their lead and make the first OutSouth a fully digital streaming event,” OutSouth Queer Film Festival Director Chuck Wheeler said.

Since 1995, when it debuted as the Q Film Fest, the OutSouth Queer Film Festival has attracted thousands of filmmakers, artists and fans to the Carolina Theatre each year. While the community will not be able to gather together in-person at its usual host venue, OutSouth fans can enjoy the best of queer cinema safely at home. Plus, the Carolina Theatre will offer takeout concessions items, including its delicious popcorn and local craft beer, on November 13 and 14.

“We might be a virtual festival this year, but our goal remains unchanged – to provide you with a unique and entertaining viewing experience through showcasing the most diverse and best line-up of queer cinema that our festival has ever offered,” Wheeler said. “Our excellent and dedicated Film Programming Committee spent months screening hundreds of entries and selecting only the finest submissions for your viewing experience. We hope you will enjoy every film on the schedule.”

Among the highlights of this year’s festival programming are:

AHEAD OF THE CURVE (US, 90 min)
What made Curve magazine (first published in 1990 as Deneuve) ahead of its time wasn’t just the radical choice to boldly print “lesbian” on the cover next to out and proud figureheads such as Melissa Etheridge, Wanda Sykes and k.d. lang, it was that Curve was filled with unapologetic images and stories that radiated community and dignity, quickly becoming a cornerstone of lesbian culture. So, in 2019, when founder Frances “Franco” Stevens heard that the magazine might go out of print, she was left with two questions: Was a lesbian magazine still important for lesbian visibility? And, how had visibility changed over three decades?
THEMES: Documentary, Queer, Lesbian, History

CICADA (US, 93 min)
Introspective bisexual Ben (Matthew Fifer) drifts from one casual hook-up to the next. While recent encounters barely last beyond the following morning, he feels differently when he strikes up a conversation with Sam (Sheldon D. Brown), a handsome stranger he meets while browsing discount books at a street stall. Forming an immediate connection, the two spend more and more time together, slowly letting their guards down. But as they reveal intimate details about their lives, both men begin to recognize the need to confront past traumas if they are to truly let the other person in. Sensitively balancing moments of natural humor among the pathos, Cicada is guaranteed to be one of the year’s most acclaimed queer films.
THEMES: Gay, Romance, Drama, Interracial, Romance

OUT LOUD (US/Mexico, 84 min)
Out Loud chronicles the ups and downs of the first season of the Trans Chorus of Los Angeles — the largest group of transgender and gender non-conforming people anywhere in the world who come together regularly to sing. As the choristers gear up for their 2016 public concert debut, they share their inspiring life stories and reveal what it means to be transgender in America. This extraordinary chorus makes more than music. It is making history. Preceded by: Drip Like Coffee is an intimate portrait of a Black woman whose desire for her female co-worker complicates her relationship with her boyfriend. Traviatas tells the story of three trans women from three different generations who have managed not only to belong but to excel in society.
THEMES: Documentary, Transgender, Latinx, Non-binary, Queer, Bisexual, Pansexual, Polyamory, Black, Family, Drama, Romance, Gender Non-conforming

A full slate of OutSouth film program synopses are attached, and available at carolinatheatre.org.

The OutSouth Queer Film Festival is made possible by the generous support of the sponsors below. Their unwavering support in this often difficult year made certain that this longstanding festival celebrating queer cinema would happen, pandemic or not.

“We are so thankful for our sponsors, business partners and donors. They have shown generosity, patience, and enthusiasm as we’ve adapted the festival to meet the needs of our community,” Carolina Theatre Development Manager Audrey Shore said.

“I would like to extend very special thanks to those sponsors who stuck by us in 2020, that is, through all the delays and uncertainties that led up to this final decision to go virtual,” Wheeler added. “They could have easily backed out, or have chosen to withdraw their sponsorship this year, but they chose to remain with us and support the LGBTQ+ community in this difficult year. We are so grateful.”

For more than 25 years, the Carolina Theatre of Durham has welcomed thousands of fans seeking the best in LGBTQIA+ cinema into its historic venue. Through the power of virtual cinema, thousands more can experience the first OutSouth Queer Film Festival November 13 to 19. We hope you’ll join us for this annual celebration.