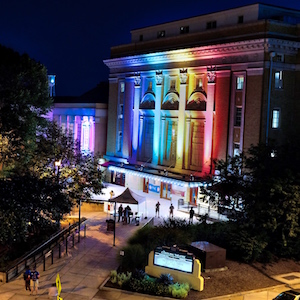 After 24 years of proudly presenting world class LGBTQIA cinema, the North Carolina Gay + Lesbian Film Festival (NCGLFF) will be renamed the OutSouth Queer Film Festival in 2020, Carolina Theatre of Durham, Inc. announced today. The downtown Durham nonprofit has produced the film festival since 1995, when it debuted as the Q Film Fest. It was re-branded as the NCGLFF the following year.

Among the largest gay, lesbian, transgender and queer-centric film festivals in the United States, NCGLFF has attracted hundreds of thousands of filmmakers, artists and guests to the Carolina Theatre over more than two decades. Discover Durham named NCGLFF a Signature Event for Durham, the highest honor bestowed on a cultural event or attraction by the city’s marketing agency.

The festival’s programming committees will begin taking submissions for the final NCGLFF on March 1 via the online portal at FilmFreeway.com. NCGLFF will return to downtown Durham August 15-18, 2019. All films will screen at the Carolina Theatre, using the historic venue’s 1,000-seat Fletcher Hall; the 226-seat Cinema One and the 49-seat Cinema Two.

Carolina Theatre officials and the festival’s steering committee discussed the name change internally for nearly two years before deciding on OutSouth. The renaming was a focused effort to make the festival’s name match the inclusive and diverse spirit that has shaped its programming over more than two decades.

“Since 1996, NCGLFF has been among the premier lesbian and gay film festivals in the United States. We are committed to reflecting our increasingly diverse and inclusive community,” Chuck Wheeler, NCGLFF Men’s Programming Committee Chair, said. “Our success is due to our loyal supporters, many of whom have encouraged us to adopt a new and complementary name change that echoes our widening embrace and proudly mirrors our LGBTQIA world.”

While the festival will be renamed, its location, organizational structure and mission of celebrating a worldwide glimpse of today’s queer life and bringing the community together through film will continue into its second quarter-century.

“We’re so very proud to have 24 years of OutSouth/ NCGLFF as a Carolina Theatre of Durham signature event,“ Carolina Theatre President and CEO Rebecca Newton said. “The history of, passion for, and commitment to recognizing the significant contribution to film and the arts from the LGBTTQQIAAP community shines a light on the important role that diverse communities play in the cultural arts. Here’s to nearly a quarter century of inclusion of ALL communities at Durham’s oldest and best cultural jewel, the Carolina Theatre of Durham. And here’s to recognizing the cultural importance of the OutSouth community.”

The North Carolina Gay + Lesbian Film Festival has been proud to call Durham home for more than two decades. In 2020, the OutSouth Queer Film Festival will begin a new era of cinematic excellence in the welcoming environment of its very special hometown.