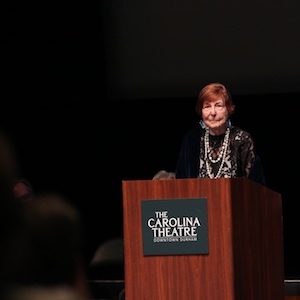 The Carolina Theatre of Durham sadly announces the passing of Pepper Fluke, 87, an extraordinary woman whose tireless work and steadfast support helped both save and sustain our historic building for more than 40 years. Without Pepper’s direction, energy and generosity, the Carolina Theatre would simply not exist as it does today.

In the mid-1970s, Pepper teamed with Connie and Monte Moses to recruit a volunteer corps of dedicated citizens who helped rescue the Carolina from the wrecking ball that claimed so many other Durham landmarks in that era. Well past the initial rescue and renovation of the theatre, Pepper remained a dedicated supporter of the arts in the Triangle and an ongoing benefactor of the Carolina Theatre.

A loving mother and wife, Pepper will be remembered by the Carolina Theatre community for her unselfish dedication, her uncommon kindness and her altruistic, unflinching support that has helped sustain our venue as a hub of the arts community in the Triangle for nearly a century.

Our thoughts and prayers are with her friends and family at this difficult time.

(Photo Credit: Ken Huth of HuthPhoto from our 90th Anniversary Celebration in early 2016)