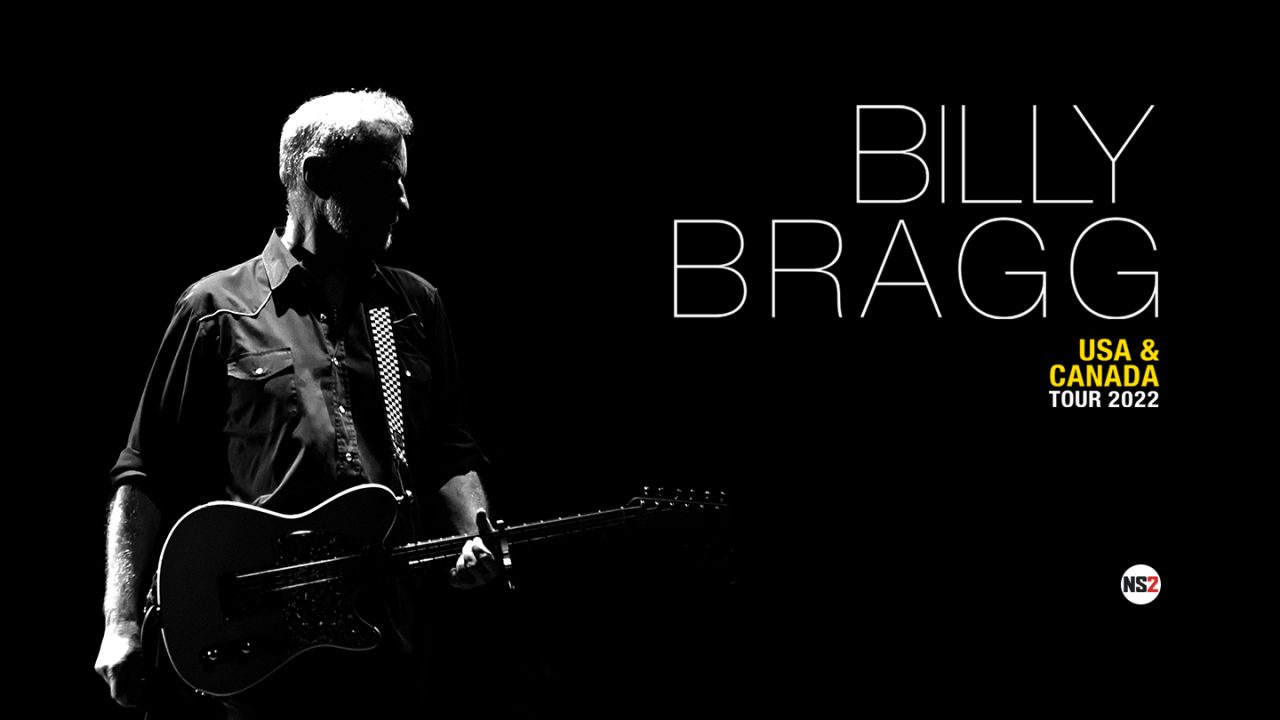 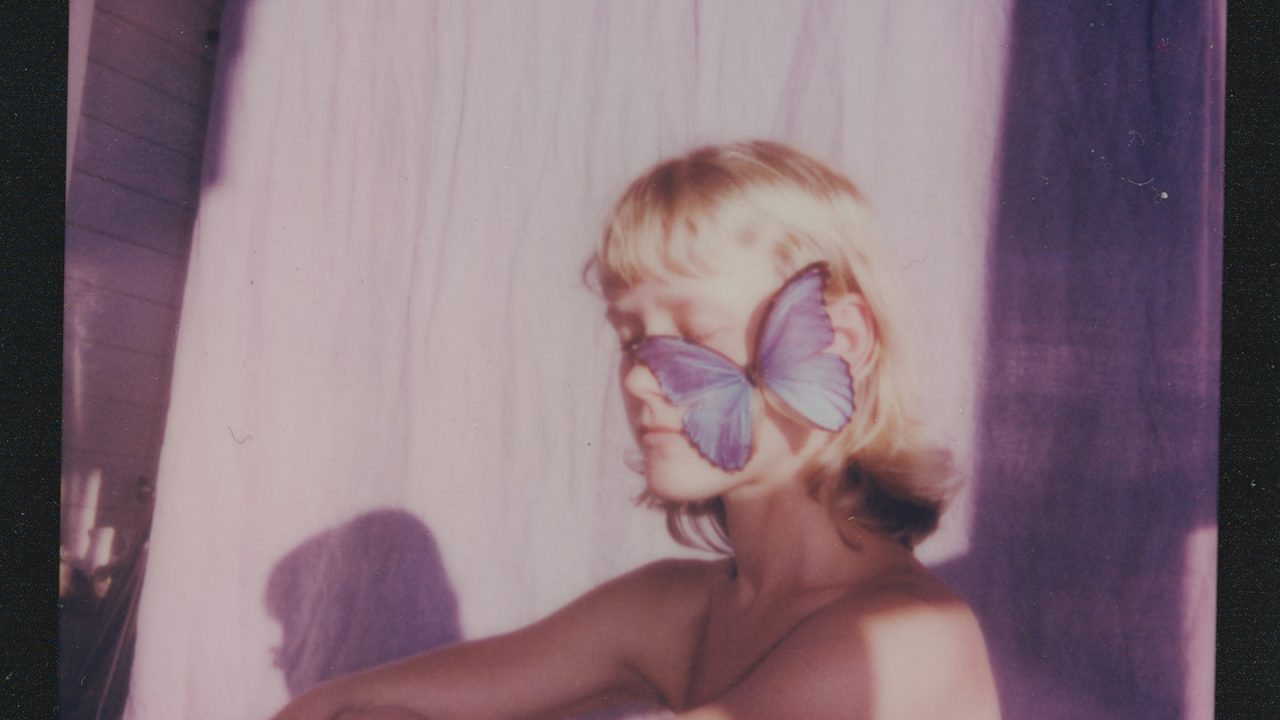 It was thirty-seven years ago when the Saturday boy from Essex who would become the UK’s foremost political singer-songwriter released his first record, “Life’s a Riot with Spy Vs Spy.” It contained seven songs, honed live, bashed out on a punk rock electric guitar, and wrapped in a utilitarian, single-colour sleeve. It charted at number 30 in the national charts. Billy Bragg had arrived. His first record company bio stated that he had ‘risen from obscurity to semi-obscurity.’

Politicised by a Tory government operating without love or justice (hard to imagine now), this previously adrift young man from Barking, with few career opportunities, bought himself out of the British Army in 1981 (‘the best £175 I ever spent’), determined to make a living out of song. After “Life’s A Riot,” he blazed a modest trail with similarly direct follow-up “Brewing Up with” … and ‘difficult third album’ “Talking with The Taxman About Poetry,” on which Billy succumbed to the possibility of accompaniment, with additional guitar, piano and flugelhorn.

Despite his above-parapet leftist activism – best summed up by 1985’s classic “Between the Wars” EP – his next album, “Workers Playtime,” positively jangled, with the highest ratio of love songs to protest songs yet. He played the full pop card with “Don’t Try This at Home,” even making a jaunty video for the Aids-related ‘Sexuality’, but went back to basics for “William Bloke,” reflecting a changing geopolitical world after the Berlin Wall. In 1998, Nora Guthrie, daughter of the late folk legend Woody, invited Billy to set a treasure trove of his unsung lyrics to music, which he did in collaboration with US alt-rock stars Wilco. The resulting “Mermaid Avenue” albums, Grammy-nominated, repositioned Billy in the United States, and opened up a new frontier for his rootsy, heartfelt music. His next solo album, recorded with his regular band the Blokes, brought it all back home: “England, Half-English.”

His stripped-back tenth solo album, “Tooth and Nail,” recorded in five days in acclaimed songwriter/producer Joe Henry’s basement studio in Pasadena, allowed Billy Bragg to confidently state: ‘I did it my way.’ It was his highest charting LP in the UK since “Don’t Try This at Home” in 1991.

In March 2016, for “Shine a Light,” his eleventh long-player (and third in explicit collaboration with another artist), Billy reunited with Joe Henry for a trip across America, and through Americana, guided by the lights of the mythic American railway. They boarded at Chicago’s Union Station and set out for LA, ‘looking to reconnect with the culture of American railroad travel and the music it inspired’; 2,728 miles later, the result was a series of field recordings that hymned the very act of getting from A to B. The “Observer” called it ‘a muscular chronicle’, and it reached No. 1 in the UK Americana album chart. The US tour, which began in Nashville in September, would cover even more ground, and steam across the UK and on into Australia in the New Year. He also put out six songs as ‘rapid-reaction’ downloads, written in response to fast-moving political events, and gathered them together under the name “Bridges Not Walls,” a maxim for a post-ideological climate.

The intervening three-and-a-half decades have been marked by numerous milestones and waystations for Billy, political and personal, including going topping the singles chart, having a street named after him, being mentioned in Bob Dylan’s memoir, being invited to deliver a seminar on accountability at the Bank of England and meeting the Queen.

After 13 studio albums, eight compilations, two box sets, and countless tours across countless international borders, the elder statesman of today, bearded and ‘ruggedly handsome’ (according to one Facebook fan), refuses to slip into the dotage of self-parody. Throughout his fifties, neither the fight nor the fight songs left Billy Bragg. There ain’t no stopping him now.

For every protest song (‘Between The Wars’, ‘There Is Power in A Union’, ‘Never Buy the Sun’), there is a declaration of love (‘Must I Paint You a Picture’, ‘Brickbat’ or, from “Tooth and Nail,” ‘Chasing Rainbows’). ‘Mixing pop and politics’ is a tall order, but where there’s a starting block, there’s a great leap forward.

Governments rise and fall, fashions come and go, pop stars are built up and knocked down by a fickle media, and Billy Bragg adapts to survive. His enemies remain essentially the same: craven politicians, inhumane corporations, plus assorted racists, fascists, bullies, reactionaries and people with floppy fringes.

Orator, entertainer, rabble-rouser, negotiator, pamphleteer, the fabled ‘big-nosed bard from Barking’, Billy Bragg is many things. A regular contributor to the national debate as TV pundit and newspaper columnist, he continues to sharpen his pen as a writer, and his first book, the considered, wide-ranging treatise on English identity “The Progressive Patriot,” opened up a whole new vista of possibility for a man who never stops engaging with all the trouble in the world. Whether it’s unionized workers, constitutional reform, bankers’ bonuses, illegal wars or the undemocratic commandeering of a portable toilet backstage at a festival, Billy Bragg will help fight your corner.

To quote his enduring live favourite ‘Levi Stubbs’ Tears’: the world falls apart, but some things stay in place. That optimism lives on in ‘Tomorrow’s Going to Be a Better Day’ from “Tooth and Nail:”

“Take it from someone who knows the glass is half-full, tomorrow’s going to be a better day, no matter what the siren voices say … we’re going to make it that way.”

In 2017, he followed up “The Progressive Patriot” with his second book, the deeply-researched, heartfelt history of skiffle, “Roots, Radicals & Rockers: How Skiffle Changed the World” (Faber). It was shortlisted for the Penderyn Music Book Prize (“the Mercury Prize of Books”). In 2018, he was honoured with the PRS Outstanding Contribution to British Music award at the Ivor Novello awards, sealing his status as a statesman as well as a great musician and chronicler of his time.

Touring Bragg hotspots in New Zealand and Australia in 2019, Billy literally road-tested a new live format for 2019: “One Step Forward, Two Steps Back.” The idea was to play three consecutive shows over three nights at each given venue on the itinerary – the first night a current, mixed Bragg set; the second from his first three albums; the third from his second three albums. “It’s a way of keeping things interesting,” he explained. The tour covered the US, UK and Ireland and Europe, regularly selling out, but in a good way.

Lockdown couldn’t keep him down. Instead, he looked inwardly as well as outwardly, and joined the two together, strong. A new set of songs – “The Million Things That Never Happened” – emerged, blinking in the light, and nailing what so many of us felt, and still do feel.

Acclaimed singer-songwriter Alice Phoebe Lou has announced the premiere of a brand new album on 2nd December 2021. “Child’s Play” is available now at all DSPs and streaming services.

Produced by Loving’s David Parry at his Dobro Genius studio in Victoria BC, “Child’s Play” includes the stunning first track “Underworld”. With its thumping rythm and electrical storm energy,”Underworld” stands among the South Africa-born, Berlin-based songstress’s most affective tracks thus far, an intense outpouring of feelings describing the alternate world one exists in with another person when the connection transcends words.

“Child’s Play” reunites Lou with producer David Parry, who previously traveled to her adopted hometown of Berlin to record this year’s acclaimed “Glow”. Lou’s dream to record at Parry’s Vancouver Island studio lived on and in time, she – along with best friends and longtime musical partners Ziv Yamin (drums, keyboards) and Dekel Adin (bass) – were able to secure permission from Global Affairs Canada and flew to Victoria. A two-week quarantine on beautiful Nanoose Bay allowed ample time to tie up loose ends before spending 10 days at Parry’s Dobro Genius studio. Working with the producer’s collection of analog gear and vintage instruments, Lou and her musical compatriots nurtured her recently composed songs into something altogether fresh, a natural evolution of sounds and vision from her previous work.

“The process was simple and intuitive”, Lou says, “using an 8-track tape machine and allowing the very new songs to grow into themselves. We worked tirelessly on a limited schedule to bring these personal songs to life, so used to each other by now from recording “Glow” together that even though the workload was immense, it felt easy and enjoyable, the four of us very much on the same page.” 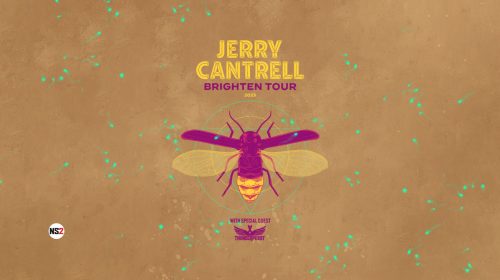