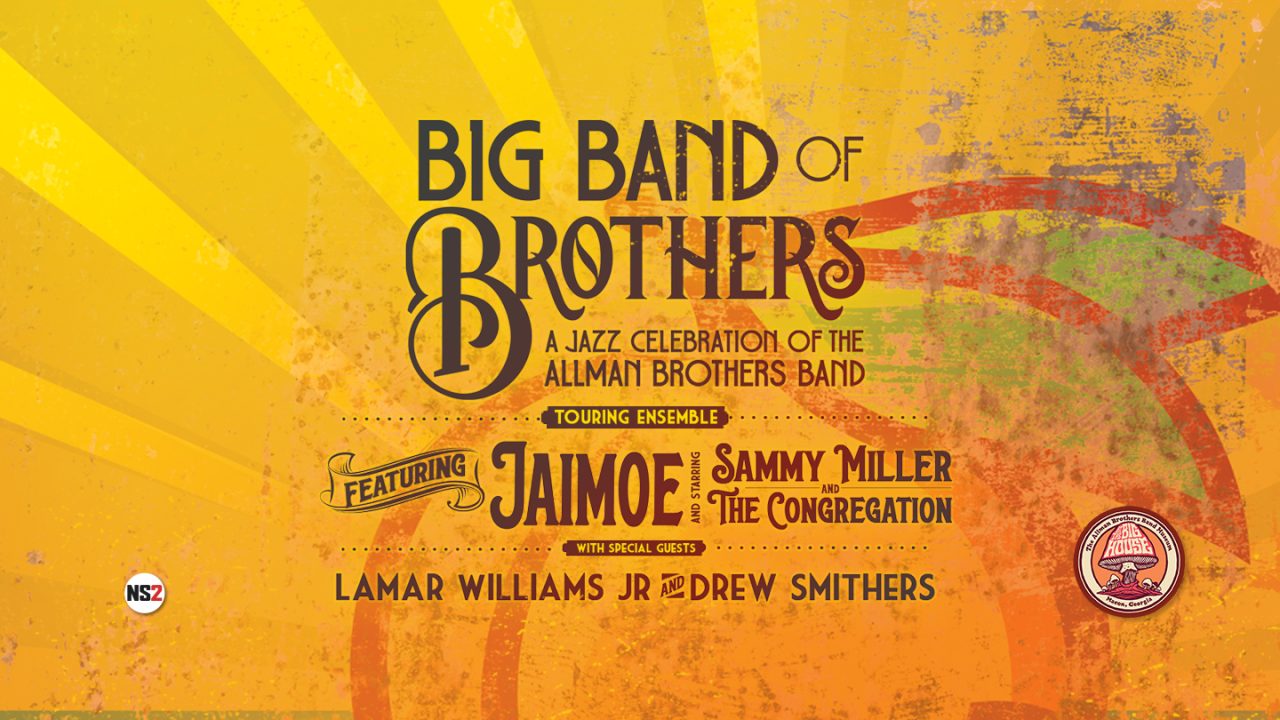 BIG BAND OF BROTHERS: A JAZZ CELEBRATION OF THE ALLMAN BROTHERS BAND

Released in 2019, the studio album featured Marc Broussard and Ruthie Foster on vocals on two songs each, and Jack Pearson’s slide guitar on one (Jack was a member of the Allman Brothers Band from 1997 to 1999.)

Wycliffe Gordon, celebrated trombonist of Jazz at Lincoln Center fame, is featured soloist on “Don’t Want You No More,” and he wrote the arrangement for “Statesboro Blues.” Gordon is consistently ranked among leading trombone players in the Downbeat critics poll, topping the list at least five times.

While jazz interpretations of Allman Brothers Band classics might come off as a surprise to some, the genre always held great inspiration for the band. Gregg Allman, recalling their early days, said that “Jaimoe [drummer Jai Johanny Johanson] gave us a proper education about jazz and got us into Miles Davis and John Coltrane. Kind of Blue was always on the turntable – Duane really got his head around that album – he also seriously dug Coltrane’s My Favorite Things.”

Warren Haynes, longtime ABB guitarist, offered this about Duane, “He talked a lot about how important Coltrane was in influencing him. It’s almost cliche to say that you’ve been influenced by John Coltrane these days because it’s so obvious that he’s an icon. But for somebody in the early ‘70s to actually take that influence into a rock or pop sensibility was quite a stretch. Perhaps he helped to make Coltrane a universal influence in ways he didn’t even realize…”

Big Band of Brothers A Jazz Celebration of the Allman Brothers Band is available on compact disc, peach-colored vinyl, and from all digital retailers.

The album garnered massive praise from both jazz and ABB fans, and from critics in music publications:

“Albums offering jazz renditions of rock songs are commonplace nowadays, so the element of surprise has faded. But A Jazz Celebration Of The Allman Brothers Band is an accomplishment of a higher order.” Downbeat

“…a collection of horn-fueled renditions of some of the Southern-rock pioneers’ most enduring compositions, interpreted through a 15-piece big band.“ Relix

“Listening to these jazz interpretations, Duane would likely be proud. It’s almost like hearing the band all over again, as the big band recreates that initial excitement and deep feeling of soul that this writer recalls hearing the first ABB studio album in a dorm room 50 years ago.” Glide Magazine

“It’s really quite thrilling to hear these familiar melodic lines delivered with a big band punch, and the superior chops these players possess make for some dynamic, inventive soloing. Big Band of Brothers is a concept that really works and is a testament to the malleability and enduring appeal of blues-derived forms explored by the Allman Brothers Band.” Living Blues Magazine

“Big Band of Brothers is a truly remarkable and imaginative take on the music of the legendary Allman Brothers Band, rendered with affection and imagination, it asks us to appreciate the true genius of Macon, Georgia’s finest.” PopMatters

Sammy Miller and The Congregation