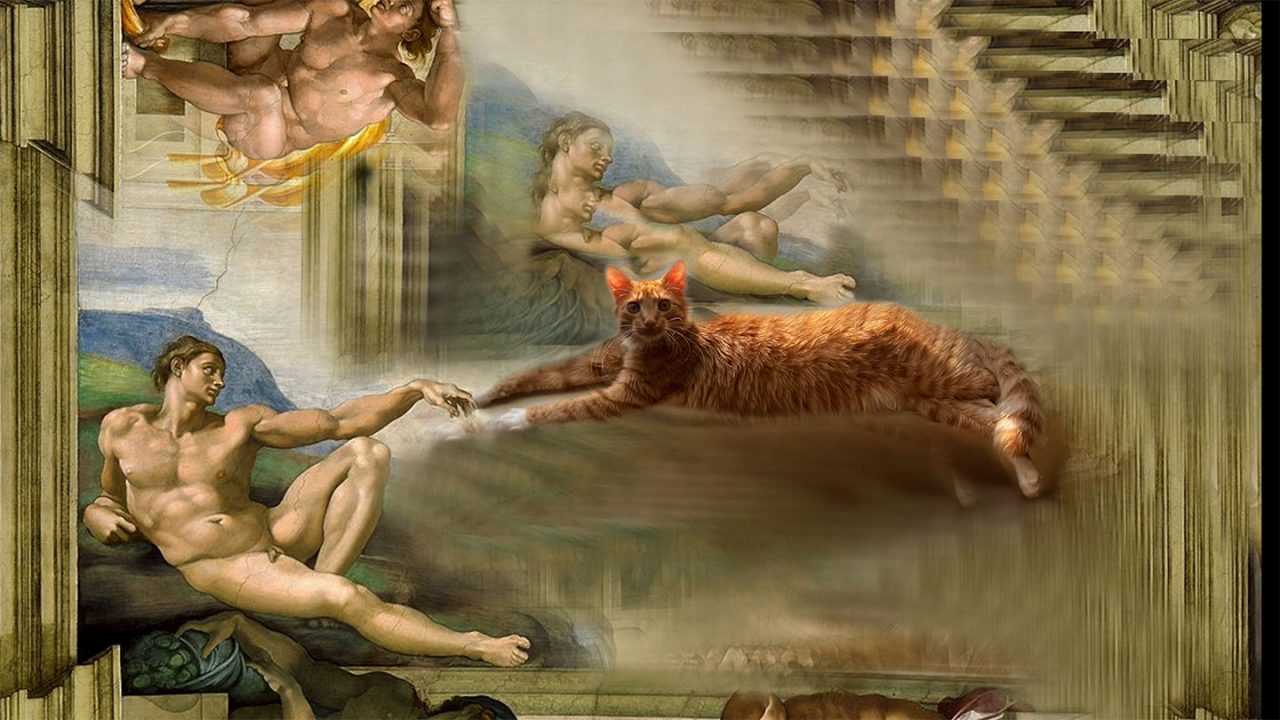 The NY Cat Film Festival™ is an exploration through film of the fascinating felines who share our lives, creating a shared audience experience that inspires, educates, and entertains. Cats have their own unique and indescribable bond with people – even when living independently as community cats. For far too long, felines have been the “invisible” part of the human-animal bond and it’s time to shine the spotlight on these magnificent creatures and the humans devoted to them. A portion of every ticket at every destination goes to a local animal welfare non-profit, bringing community awareness and support for the needs of local kitties.

This year’s Festival had the most international submissions of any year yet, with films from Brazil, Canada, Chile, China, Iran, Italy, Kuwait, Malta, Poland, Spain, Taiwan, the UK.

CAT FIGHT [1 min]  20-year-old director Zoe Neely from Shaker Heights, Ohio
An animated tale of two cats – one who is real and one who is not – who are jealous of each other. One cat takes it upon himself to get rid of the other.

KATZ OF NY [6 min]  25-year-old director Pablo A Jimenez from New York
An animated story about two down-on-their-luck cats, Matt and John, who hang out for free beer at Katz Bar, lamenting on losing their jobs – when a new employment opportunity arises.

CATS OF MALTA [20 min]  Director Sarah Jayne Portelli from Australia and Malta
A documentary celebrating the island’s stray cats and the volunteers who show the large population unconditional love and support.

PRIME SUSPECT [2 min]  22-year-old director Gail Albright from Coppell Texas
An animated “thriller” about a dog masquerading as a cat to evade being unmasked as the “Sirloin Snatcher” who has eaten all the steaks in Mew York,

ACHROMA [4 min]  22-year-old director Sarah Steidle from Brooklyn, New York.
Amidst a colorful world, a young woman living in shades of gray keeps to herself in fear of spreading it to others, until she finds a perfect (and persistent) companion.

THANK YOU, COME AGAIN [4 min]   22-year-old director Aysia Segura from Brooklyn, New York.
The wildly imagined animated saga of a man who takes his cat to the grocery store to get their favorite snacks.

HUGO [5 min] 37-year-old American director Justin Christopher Ayd.
A contemplative look at grief over pet loss as a couple finds their own artistic ways to express tributes to Hugo.

DUET [5 min]  25-year-old director Yadid Hirschtritt Licht from Chicago, Illinois
An animated story of a cat adopted by an elderly woman, who teaches him to play piano.

PLEASE RESCUE ME [14 min]  70-years-young director Kim Best from Durham, North Carolina
A documentary chronicling a few of the 250 cats rescued from trees by an avid tree climber.

PURRADISE’S GOT TALENT [6 min]  68-year-old Priscilla Dean from Phoenix, Arizona.
A spoof on the human version of this game show concept, starring the rescued cats of the Purradise Cat Sanctuary.

WHAT IF? [2 min]   Director Melanie Futorian from Hell’s Kitchen, New York City
Returning feline star from last year’s NY Cat Film Festival, Bobcat is back with a personal expression of his philosophical musings of whether the impossible is possible.