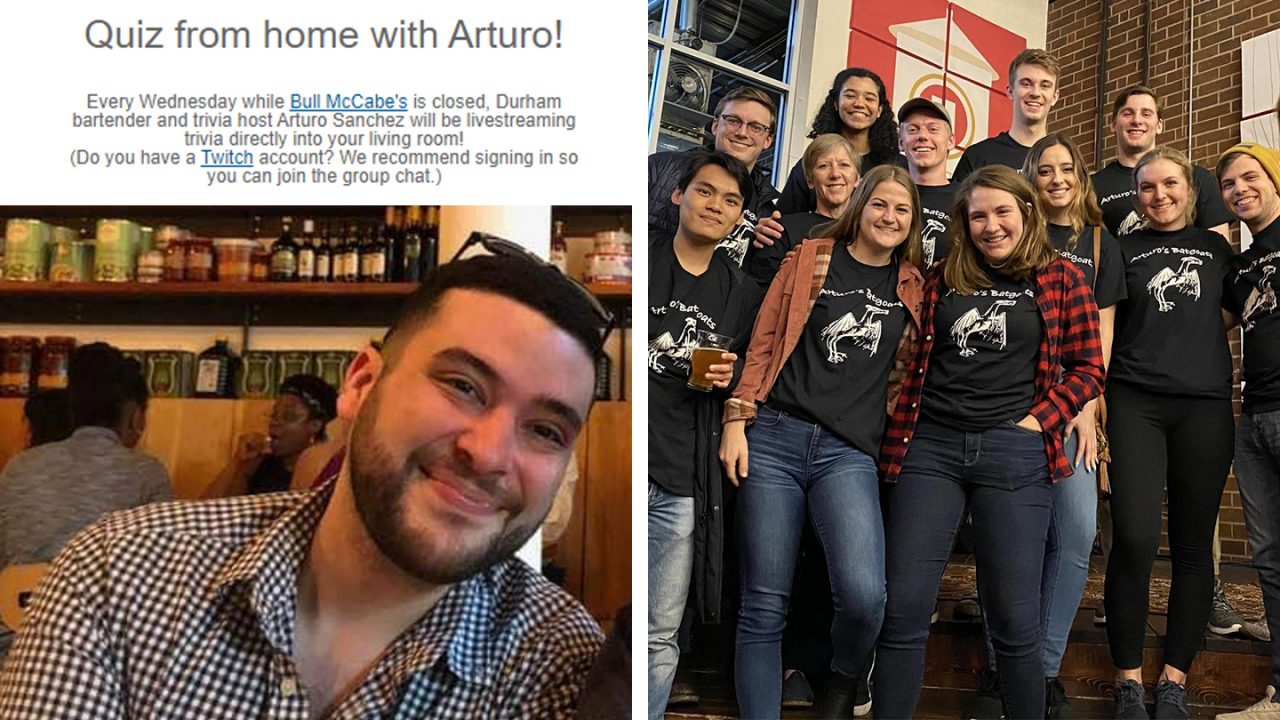 Each Wednesday and Thursday, Arturo Sanchez sits at his dining room table with his cat, Delilah, and a seltzer water, quizzing (almost) complete strangers on subjects ranging from Norse mythology to Atari games to Baltic geography.

QuizfromHome.com, a virtual offshoot of trivia nights hosted by Durham’s own Bull McCabe’s Irish Pub and Fullsteam Brewery, started out as a suggestion on how Sanchez could have financial support while unemployed because of the COVID-19 pandemic. The idea quickly grew into something greater: a hint of normalcy, a way for families to connect across state borders and a powerful fundraiser for community members in need.

As Sanchez prepared for virtual trivia, it got him thinking about his fellow service industry employees. “Despite the fact that I was jobless, I was still incredibly privileged,” he said. “I was eligible for unemployment. My husband has a steady job at a local tech company that seamlessly transitioned to remote work, so his salary was safe. This led me to decide to help out my fellow service industry employees who weren’t as privileged as myself, especially those who were ineligible for unemployment.”

Since the first round of virtual trivia on March 18, Sanchez has provided the opportunity for teams to donate through Venmo “tips.”

After 29 sessions of virtual trivia, he tallied the results: “The outpouring of generosity generated by virtual trivia attendees has now exceeded $18,000,” Sanchez said. “Week-in and week-out, these people are showing their love and support for their community with their wallets. And it’s really reaffirmed my belief that there’s hope yet.”

Sanchez said that he made a special point to help the small business owners, “focusing on women, queer, and POC-owned businesses which were struggling to pay their rent or health insurance for their employees.”

Toast, a downtown Durham staple since 2008, was one of the restaurants supported by trivia players’ generosity. Kelli Cotter, partner at Toast and Dashi, admitted that the pandemic is the scariest thing they’ve dealt with as a business. “We had to lay off five staff members including myself, retaining four to run our take-out only shop. We are fine in the short-term, but the stress of applying for various loans, keeping Toast afloat and our teammembers safe and with enough resources to survive has taken a toll on me physically, mentally and emotionally,” she said.

The donations shared by virtual trivia players were uplifting for Cotter and her team. “More than anything, it warmed my heart and gave my spirit, all of our spirits, a real boost,” Cotter said. Through these tough times, she’s felt the community’s support in all kinds of ways, from trivia donations to take-out orders and love from their regulars. “We’re so glad we live in Durham!”

Fasil Tesfaye, owner of Goorsha, dreamed of running a restaurant in downtown Durham for six years before they found a location in 2017. Now that the pandemic has made business unpredictable, they’ve just been trying to survive. “Sometimes, business will pick up and we can’t predict it, so we won’t have labor for it,” he explained. “Sometimes, when we have labor, it’s very slow and we lose money. It’s been disastrous.”

The funds from virtual trivia came as a surprise to Goorsha — a customer simply came and said they were selected for that week. “It was very heartwarming — people thinking of us and trying to give back to community and to the service industry. It made me proud to be in Durham,” he said.

In June, as protests followed the murder of George Floyd, Sanchez recognized an immediate need for support for those who were incarcerated, which led him to the NC Community Bail Fund. “Since then,” he said, “every trivia I’ve hosted has split the earnings between restaurant folks and the bail fund.”

“The first trivia that I hosted after George Floyd’s murder was by far our biggest night for donations,” Sanchez added. “A trivia regular, whose identity they requested I withhold, offered to match dollar for dollar all the donations brought in that night. All told, we raised $2800 and, with our donor’s match, were able to send $5600 to the NC Community Bail Fund of Durham.”

Sanchez found his way into Durham’s trivia scene as a recent college grad, when he was asked to guest host at the James Joyce. “A free meal, $75 and cheap beer go a long way in convincing a cash-strapped twenty-something who likes to be the center of attention to do someone a solid,” he said.

As for Bull McCabe’s trivia, he started participating during Gee Barger’s reign as host. “The way Gee hosted, bantered, got lovingly heckled and gave it right back was marvelous. It was glorious. Transcendent. Hilarious. The trivia itself became almost secondary.” Sanchez was immediately hooked. He joined a team of regulars, and started attending trivia weekly. “I felt like I had really made it into the Durham ‘scene,'” he said.

By that point, McCabe’s itself — with its kitchen sink fries and $2 domestic beer specials — was already ingrained in his life. “The staff made me feel so welcome right away,” Sanchez said. “Within a couple years, I was having Thanksgiving dinner at my Bull McCabe’s bartender’s house and sharing a house with a fellow barfly.” By late 2018, he had taken over as McCabe’s trivia host.

Then the pandemic hit. Sanchez, who has a day job as a server/bartender at Pizzeria Toro, found his routine grinding to a halt. “I went from being on my feet for hours and talking to 100 or so restaurant guests every day to sitting on my couch, not doing much more than counting the whiskers on my cat’s face,” he explained. “29, by the way — she’s weirdly asymmetrical.”

It was Sanchez’s friend and trivia predecessor Kyle Miller who suggested virtual trivia and set up the website, QuizFromHome.com.

All Sanchez needed to do was figure out how to transition bar trivia to a digital environment — which, he said, had an intense learning curve. “It honestly took a lot of the enjoyment out of it initially,” he explained, “especially because the trivia night experience is tied so closely to the bar experience.” Instead of seeing his regulars and friends cheering him on, Sanchez had his cat, his seltzer water and faceless trivia teams plugging in answers.

Gradually, as the wrinkles in the system were ironed out — and automatic scoring was added, thanks to Miller — the experience improved. “It started feeling like hosting trivia again,” Sanchez said. After the first night of virtual trivia without any issues, he remembers turning to his husband and saying, “Baby, I think I’m back.”

With the system streamlined, Sanchez was free to focus on what he does best — organizing the entertaining, unexpected trivia that keep players coming back. His philosophy for a good trivia round is simple: “I like writing questions that everyone can enjoy.” While that means a balanced set of questions and avoiding narrow topical rounds, it also defines Sanchez’s attitude as a host. “The absolute last thing I want is to have anyone finish a trivia night feeling stupid or defeated,” he said. “I love it when folks tell me something along the lines of ‘Man, that last round kicked my butt, but now I know a bunch of stuff I didn’t know before!'”

Just like Gee Barger drew Sanchez to trivia, his style has fostered a loyal set of regulars. Arturo’s Batgoats, a ten-person team founded at Fullsteam’s trivia nights, love his hosting so much that they commemorated him in their team name. (They even have t-shirts.) The Batgoats shared, “Trivia wouldn’t be the same without Arturo’s positive energy and supportive commentary. He cares tremendously about the players and everyone in the community around him and keeps us coming back every week.”

Zennie Carnival, a team of family members playing from across seven states and four time zones, joined virtual trivia in April. Before the COVID-19 pandemic, the family would look for places to play trivia together over holiday gatherings and vacations. So when Nancy Zeman heard about virtual trivia on Fullsteam’s Facebook page, she formed the team. “I can’t tell you how valuable it has been for me to see my kids once or twice a week by video,” Zeman said. “Who knows when we will get to see them in person and hug them again?”

For Carleigh Zeman, Nancy’s daughter, the actual game comes second to the experience of playing with her family. “The trivia is always lots of fun and we enjoy Arturo’s style and questions, but what we love even more is the time in between where we can all catch up and fill each other in on any news,” she said. “I was skeptical at first, but virtual trivia has been a soaring success and a very special event for us.”

Liz Word-Glennie, a fellow Zennie Carnival member, enjoys the challenging — but possible — trivia and opportunity to connect with her far-flung family members. “And frankly,” she added, “we have all come to love Arturo and come to see and support him.”

Once things are safer, the Zennie Carnival team hopes to have a reunion in Durham and play one of Arturo’s live trivia nights.

Trivia, after all, is an essential part of the Bull City’s culture. “In the early 2010s, someone said trivia was the official religion of Durham,” Betsy Shane shared. While members have come and gone, her team has existed at McCabe’s since around 2009. “Trivia was always a great excuse to get together with my friends, stay sharp, have fun and win free beer doing it.” Now, she appreciates virtual trivia for keeping her team connected (and sane) during quarantine.

When it gets down to it, though, Sanchez understands that bar trivia may rank low in the world’s priorities at the moment. “I realize that the casual reader might take a gander at the content of this post and think, ‘Bar trivia? There are more important things going on right now,'” he said. “And that person would be absolutely, 100 percent correct. But I like to think that bar trivia contains the little elements of a lot of what keeps us human during these challenging times: the pursuit of knowledge, laughing to keep from crying, and most importantly, a sense of community that transcends the inability to commune in person.”

The Carolina Theatre of Durham is a proud sponsor of Bull McCabe’s Trivia, and has previously sponsored Fullsteam Trivia. You can play along on Wednesday and Thursday, respectively.

Lydia Huth is a marketing coordinator for the Carolina Theatre of Durham, and her trivia specialties are literature and theatre.