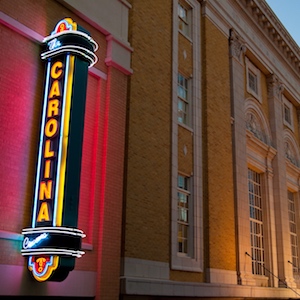 DURHAM, NC — November 11, 2019 — After helping guide the Carolina Theatre of Durham through one of its most successful eras in the venue’s 93-year history, Rebecca Newton will retire as president & CEO of the nonprofit that operates the city-owned venue by the end of June 2020, the organization’s Board of Trustees announced today.

Since taking over as the head of Carolina Theatre of Durham, Inc. (CTD) in October 2017, Newton has overseen consistent growth in the number of education, live arts, cinema and rental presentations occurring in the venue. Both overall attendance and profit contribution have increased significantly during her tenure, as the nonprofit begins counting down to the theatre’s centennial celebration in 2026.

Highlights include increased programming with sold-out shows in the Arts Discovery Educational Series (ADES), Family Saturday Series (FSS), film programs and live events, and a 30 percent increase in private support, including the two largest development grants in the nonprofit’s history. Newton has also overseen the organization’s strategic planning process along with the nonprofit’s Board of Trustees and senior management team.

“It has been my honor and privilege to spend the past two years serving the theatre. There have certainly been challenges, but in the big picture, they pale in comparison to all the great work that happens every day at CTD and the happy faces of every age group, race and gender we serve,” Newton said. “I couldn’t have asked for a smarter or more dedicated group of people to work with every day. And the positive feedback I continue to receive from the community coupled with the ongoing support from the City of Durham makes me thankful I accepted the position.”

The nonprofit’s board has formed a committee which will help select a firm to conduct a national search to find Newton’s successor as head of the arts organization.

“On behalf of the board, I want to thank Rebecca for her outstanding leadership,” Board Chair Bill Brian said. “She has placed the theatre in a strong position and provided a solid foundation for the theatre’s future.”