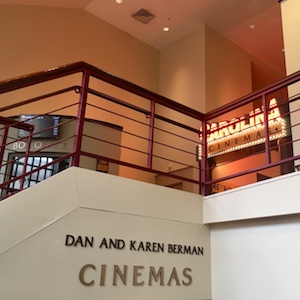 In recognition of the contributions and service of its former interim President and CEO Dan Berman, the nonprofit that operates the historic Carolina Theatre of Durham has named the venue’s cinema wing after Berman and his wife, Karen. Carolina Theatre of Durham, Inc.’s Board of Trustees has unanimously approved the cinema naming measure, permanently acknowledging Dan Berman’s remarkable tenure as the head of the nonprofit from January 2016 to mid-October 2017.

The Carolina Theatre will celebrate the naming of the cinemas with a ceremony at a future date. The 92-year-old theatre has already installed the Bermans’ names over its ‘CINEMA’ sign above the stairs in the modern wing of the facility that was added when the venue expanded in the mid-1990s. Staff recently affixed a plaque to a wall on the cinema box office as well.

“It was our great fortune to have Dan Berman step in and keep our nonprofit afloat during a particularly stormy period in the theatre’s history,” Carolina Theatre President & CEO Rebecca Newton said. “He was extraordinarily generous and resourceful, which directly and quite literally affected our organization’s bottom line. The outcome to his tenure has benefited our local and state communities.”

Serving as interim president and CEO on a volunteer basis in 2016 and 2017, Dan Berman helped the nonprofit erase a substantial deficit that threatened to force a closure of the venue. In just 15 months under Berman’s leadership, the nonprofit erased a $1 million-plus net deficit and emerged with a surplus.

Working tirelessly with theatre staff and the City of Durham, Berman helped arrange a matching funds program in partnership with the city, doubling the donations collected by the nonprofit’s development team and accelerating the pace of the recovery of the organization from financial distress. Berman also forged an exclusive agreement with National Shows 2 (NS2) of Nashville to help reduce the amount of risk the nonprofit assumes when presenting concerts, comedy and film at the historic downtown Durham venue.

Berman also oversaw the creation of a program between the nonprofit and Durham Public Schools (DPS) that makes it possible for thousands of DPS students to attend the Carolina Theatre’s Arts Discovery Educational Series performances each school year at no cost.

“It was a privilege to work with the talented and devoted staff of the Carolina Theatre, as well as many dedicated city officials,” Dan Berman said. “It’s particularly gratifying to see the Carolina as busy and vibrant today as it has been at any time in its storied past. It is a great honor for Karen and me to have our names associated with an institution that is so close to our hearts and such an integral part of the cultural life of Durham.”

Saved from potential demolition by a group of hard-working local residents in the 1970s, the Carolina Theatre has a deeply-rooted history in volunteerism. As a result of his extraordinary efforts at the helm of the nonprofit that will operate the majestic venue through its centennial, Dan Berman is one of its ultimate volunteers. As a result of the board’s vote, Dan and Karen Berman’s names have taken their rightful place alongside those of Connie and Monte Moses, two of the most significant cornerstones of the venue’s long history as a beacon of culture in downtown Durham.